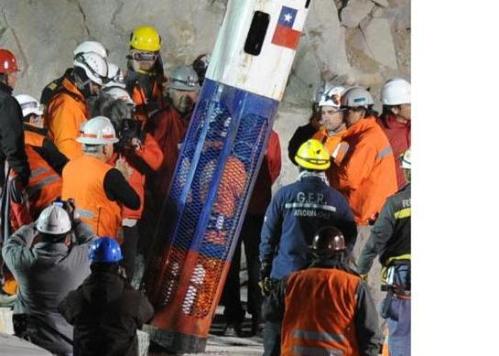 Copiapo, Chile – In a shocking turn of events, ten of the 33 miners trapped underground here returned to their subterranean home today, just one week after a miraculous rescue.

The men reported being disenchanted with life above ground.

Entering the Phoenix rescue capsule for the 2300 foot descent to the collapsed mine, Esteban Alfonso Rojas Carriz exclaimed “Fuck this shit” and then disappeared.

The man waiting, Florencio Antonio Avalos Silva, explained “Ever since we got out, the media, our family, friends — they won’t leave us alone. It sucks. Maury Povich keeps calling me! And who the hell is Parker/Spitzer? Suddenly my wife is senorita hollywood and wants a reality show. No thanks.”

His friend Carlos Mamani Solis, a 23 year old Bolivian, agreed. “I don’t want to go home. My madre makes me take out the trash and won’t let me crank tunes. Plus, it’s pretty awesome down there. We’ve got everything.”

Indeed, in the 68 days after the men were sealed in the mine, they apparently enjoyed themselves with supplies sent down a narrow bore hole: couches, NASA space food, and a state of the art entertainment system. “Netflix donated like a million dvds,” Mr. Solis grinned.

The trapped miners took to calling their home La Ultima Cueva de Hombres, or the Ultimate Man Cave. Now, Mr. Silva says, they’re going back with more gear. “We’ve got a Wii, a boombox, some plasmas. They’re putting satellite down the rescue shaft. And oh yeah, a kegerator.” The two men high-fived.

Dr. Rafael Cristobo de la Vega of the Santiago Institute of Psychiatric Medicine described the miners’ actions as symptomatic of “classic separation anxiety.” “They became psychologically bonded, not only to each other, but to that underground bunker. We must give them whatever they need. We must wait until they’re ready to rejoin society.”

Informed of the doctor’s opinion, Mr. Silva just smiled and started his descent.