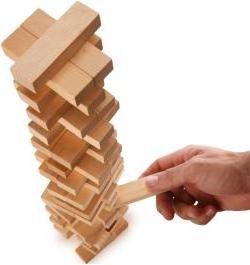 Scranton, PA – Rookie sensation Jimmy Sanders wiped the sweat from his brow and steadied his hand, reaching surgically for his sixteenth block. Then the table shifted subtly, the stack shuddered, and the world came crashing down.

In a single moment, the World Jenga Championship was lost. “My life is over,” Mr. Sanders said. He could not be reached for further comment.

Under Article 142.1 of the Handbook for Jenga Sport, Mr. Sanders was judged responsible for the stack’s collapse. IJL Commissioner Eric Lassard confirmed the earthquake constituted a “force majeure” under League Rules.

“When there’s an act of god on your turn, you lose, period,” Mr. Lassard said. “Somebody up there just doesn’t like you.”

Until Tuesday, fortune had smiled upon Mr. Sanders, a hometown kid who won a local church qualifier and was “living his dream playing with the big boys.”

In the final, he faced Hungarian superstar Hans Stone, known to adoring fans as “The Hands of Stone” for his seemingly inhuman precision and dexterity.

But Mr. Sanders somehow matched him, block for block. The stack had shrunk to an awkward spindly tower, each turn seeming to further defy gravity.

Experts indicate that Mr. Sanders was taking control. “He had Stone backed into a corner,” veteran stacker Marcus Finch said. “It’s like vertical chess, you have to think ten moves ahead. He had check-mate on the table.”

However, it was Mr. Stone who slipped on the gilded winner’s belt. “I am invincible,” he declared. “God guides my hands. God destroys my enemies.”

Reformers insist there should be a rule change, requiring a restart of the match. But any change will have to wait until next year’s World Conference in Munich.

Too late for Jimmy Sanders. A woman answering at his address suggested he was out in the woods, whittling sticks. “He was always good with wood,” she said.