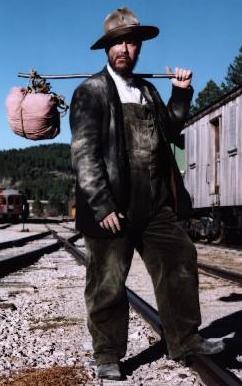 Washington – Hundreds of disheveled men descended upon the Capitol today, bindle sticks over their shoulders, and burst into a meeting of the House Transportation Committee, demanding investment in the nation’s railroads.

“Hobos can hardly get ’round riding steel,” complained Gimpy Jim Two Toes. “Rails ain’t what they used to be.”

Stinky Billy Bottoms agreed. “Gettin’ too dangerous to dive these days, derailin’ and all. Chicken Nugget Kid greased the tracks, caught the big northbound, know what I mean.”

Committee Chairman John Mica assured the men Congress was already at work on a $300 billion highway spending bill, however the hobos were not satisfied.

The 2009 federal stimulus package allocated $8 billion for high-speed rail projects. Still, the men insist trains are in fact slowing down. “Might as well hop off and walk,” said Mr. Two Toes.

Chairman Mica promised Congress would investigate immediately, but the hobos refused to leave. They unpacked their bindles, unfolded newspaper blankets, and brought in an oil drum to boil clothes.

Mr. Bottoms stripped to the waist and smiled as he cranked open a can of beans. “We campin’ here til this country gets back on track.”