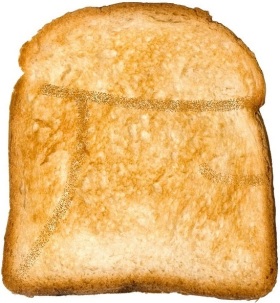 Tulsa, OK – A local woman hailed a miracle Monday morning after an image of presidential candidate Donald Trump appeared in her breakfast toast. “I saw his great victory in the burnt bread,” Melissa Andre declared. “The night is dark and full of terrors.”

Trump immediately weighed in when the image went viral. “Good-looking piece of toast!” he tweeted. “Don’t know whether to slick it with butter or hang it in my museum!”

By noon, “Trump eats toast!” t-shirts were seen outside the Democratic Convention in Philadelphia.

According to Trump’s personal chef, the billionaire prefers wonder bread lightly toasted to a sunset golden amber, with any dark crusts neatly clipped off.

At press time, sources at the DNC confirmed that a Florida family spotted Hillary Clinton in a plate of enchiladas.

New York – Just one week into his first job out of college, Jake Sullivan put in his two weeks notice today and announced his intention to hike the Inca Trail to Machu Picchu. “I’ve been grinding so long, I don’t even know who I am anymore,” Sullivan said.

Across the country, millennials are confronting the stark reality of life outside “safe spaces,” taking to social media to express their growing disillusionment, with the hashtag “25PCT.”

Psychologists used to mark the onset of such symptoms, which include self-doubt, rash decisions, and attempts to seriously get in shape, at the age of 45.  But for the generation now entering the workforce, it’s coming in half the time.

“Their whole lives, they’ve been told how special they are,” said Dr. Egon Spengler. “Now they’re finding out, maybe not.”

“You don’t know what it’s like out there,” Ray Stantz, 22, exclaimed. “The private sector…they expect results!”

Barrett agreed. “Sometimes I feel like Bernie is the only one that gets me,” she said, shaking her head. “But they just wouldn’t let him win.”

As for Sullivan, he vowed not to return until his student loans were forgiven. “You know I hear llamas are really chill.” 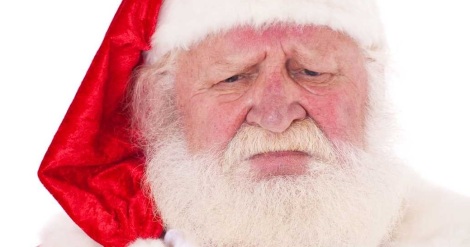 North Pole – Santa Claus will not be coming to town in the United States this Christmas. Kris Kringle learned today that he was rejected for a travel Visa due to his appearance on a “no-beard list.”

According to officials, the list was quietly implemented in recent weeks to bar entry to persons with facial hair over one inch in length. “Terrorists don’t shave,” said one official.

Santa’s workshop was eerily quiet after the news, as idle elves whispered amongst themselves about layoffs without the insatiable American market for useless crap. The big man himself was nowhere to be found, last seen walking out into the snow, shaking his head.

President Obama defended the no-beard list as a “necessary national security measure,” pointing out that it does not discriminate based on religion. Obama also announced that, with additional screening and a full-body cavity search, Mr. Kringle could receive an exemption and be removed from the list.

Meanwhile, presidential candidate Donald J. Trump declared that he would ban all incoming beards. “No goatees, no exceptions,” Trump said.

Trump also questioned Santa’s intentions. “The guy’s been living off the grid, with a bunch of midgets. He pops down the chimney, in the dead of night…there could be anything in those boxes.”

“We’re not canceling Christmas,” Trump continued. “It’s gonna be real classy. Bigger and better than ever. I know Jeff Bezos at Amazon—good friend of mine—we’ll work something out.”

Trump promised to pay for the presents himself. “Everybody gets a gun.” 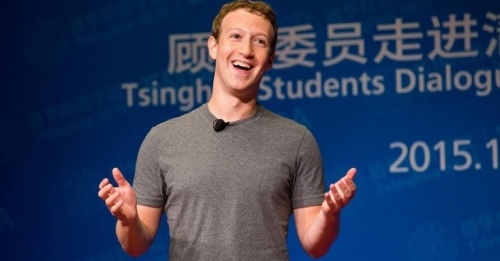 Menlo Park, CA – Facebook founder Mark Zuckerberg announced today that he would immediately liquidate 99% percent of his company shares to “fast-track” a sequel to the 1989 hit action comedy Tango & Cash.

“One’s a slick suit with a stockbroker, the other’s a wise-cracking renegade with a mullet. But they’re both good cops. And they overcome their differences to work together and kill Jack Palance. We can all learn from that.”

“You had to wonder what they did after the big shoot-out at the quarry,” Zuckerberg continued. “Did they partner up?  Maybe open a cool bar? Did Cash keep seeing Tango’s sister?”

Zuckerberg’s wife, Dr. Priscilla Chan, was skeptical of the investment and encouraged the philanthropist to pursue “more options.”

Local Man Refuses to Turn Clock Back One Hour

New York – Bravely refusing to give in and “fall back,” Travis Chester entered his sixth consecutive “sol” of unadjusted timekeeping today, rising at the same hour he has since spring.

All week he has arrived at work “early” at eight in the morning, and management has taken notice. “The guy is really getting after it,” supervisor Dale Walters said. Colleagues, however, report that he also checks out daily at 4 p.m.

Chester makes no apologies. “The subway is less crowded, and it’s still light out.”

Presidential candidate Ben Carson hailed Chester as a hero for defying government regulation. “There’s no DST in the Bible,” Carson declared. “You put a stick in the mud and make a sundial.”

Chester plans to stick to his schedule. “My body knows what time it is,” he said.  “Plus, I can’t fix the timer on my coffee machine.” 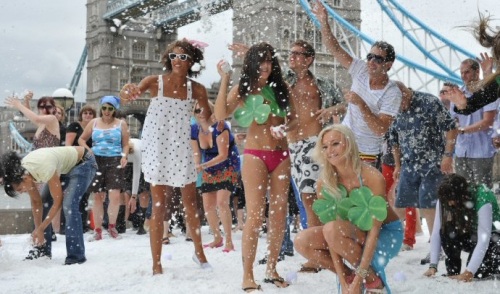 Athens – Who needs cheddar when you’ve got feta? Teetering on financial collapse, amidst empty ATMs and shuttered banks, Greece officially pulled out of the European Union today and declared feta cheese the national currency.

Jittery financial markets ticked upward, and feta was trading well against the dollar with one liter of brined white curds at $3.07.

Greek Prime Minister Alexis Tsipras announced that “gumball-style” machines were being installed at all major retailers of flip-flops.

“I’m rich!” cried Achilles Kousis, as he pushed an overflowing wheelbarrow through Omonia Square, leaving a trail of cheesy pearls.

With vast reserves of sheep and goat’s milk, experts indicate that feta could sustain the Greek economy indefinitely.

Prime Minister Tsipras also announced that “with the liquidity situation solved,” all Greek citizens could “take the rest of the summer off.”

Celebratory feta fights immediately broke out across the nation, with Greeks gorging on fistfuls of soft curds and building “snow-men” in the streets.

As night fell, a carpet of crumbly white covered this ancient city, and officials warned that feta supplies were already running low. Economic Minister Yanis Varoufakis shook his head.  “Well I guess we still have yogurt.” 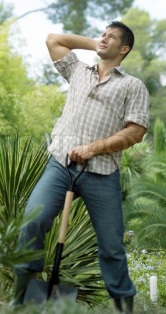 Topeka – Calling it his “life’s work,” 28-year-old Arthur Chesterfield broke ground today on a museum dedicated to himself. “This is for posterity,” he announced, as his mother looked on shaking her head.

Chesterfield, an assistant manager at Pizza Hut, live-streamed the ceremony across his social media accounts, and released a digital museum guide describing the “historical attractions” to be displayed in bullet-proof glass cases.

Highlights include an original copy of Chesterfield’s first grade cursive writing test, which earned an A+ with two star stickers, and 32 rare photographs from Chesterfield’s 2005 vacation to Myrtle Beach. The “Hall of Sport” will feature a “game-worn” jersey from the 1993 Topeka Comets youth soccer team. And a Hall of Mirrors will allow visitors to “enter the headspace” of Mr. Chesterfield.

Chesterfield reportedly embarked on the project when his mother asked him to clean out his old room, and he could not bear to part with any “pieces of history.” So he decided to take over the backyard and “build his Graceland.”

“Some day, probably soon, all of this will be very important. People will line up, and spend hours here, trying to really get to know me,” he said.

Chesterfield’s mom sighed. “Quit playing with yourself and take out the trash.”

The NCAA has reportedly sent two men back in time to stop rules violations, before they happen. Their first mission: to stop former Syracuse basketball player Eric Devendorf from getting a “discounted tattoo,” in the year 2007.

“It’s a matter of grave importance,” NCAA chairman Joe Castiglione said. “The sanctity of education, amateur sport, and society itself, hang in the balance.”

Time travel is now possible thanks to an extraordinary breakthrough by the top-secret “Indianapolis Project,” rumored to be funded by the NCAA’s 11 billion dollar television contract for its signature postseason tournament.

Scientists, warn however, that any significant changes to the past could rip apart the space-time continuum and plunge the modern world into a nightmarish abyss.

“Have you been to Syracuse in February?” time cop Jean C. Van Damme asked.

A second team is preparing to venture to Chapel Hill circa 2004 to investigate the University of North Carolina, with strict orders not to stray into Durham.

“There’s a very real chance Rashad McCants may skip class,” Castiglione warned. “In the college years, the brain is like an alcohol-soaked sponge, which can also soak up knowledge. We must get back in time.”

Orange Coach Jim Boeheim excoriated the “time bandits,” but offered that the team could retroactively self-sanction during the 1996-1997 NIT season for any newfound pre-violations.

According to sources, Van Damme also volunteered to travel back to Penn State in 1994 and “roundhouse Sandusky,” but the NCAA refused, citing the space-time continuum. 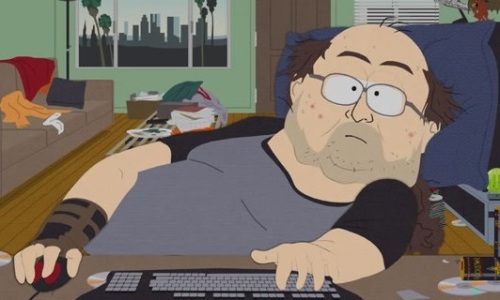 “I love my job, my dog 🙂 and traveling the world,” read the profile of yolobro28 on the popular dating site MutualFriends.com, revealed Friday to belong to Simon Chester of Manhattan. According to sources, Mr. Chester, 35, is a low-level accountant who lives with a cat named Furry and does not own a passport.

Despite boasting online of his athletic build, six foot two frame, and a well-rounded personality, Chester appeared at the Pulitzer ceremony today a diminutive obese man. “He’s round alright,” said Clark Davis, a friend who reported that Chester spends 100% of his free time playing Magic the Gathering. “Like a bowling ball.”

After a string of unsuccessful first dates, Chester was nominated for the award, going to head to head with Donna Tartt’s The Goldfinch, a coming-of-age novel that follows a grieving boy’s entanglement with a small famous painting that has eluded destruction.

Samantha Thompson, 38, came in third place for her “startlingly imaginative” Tinder profile, where the reclusive misanthrope boasted of her “amazing friends” and “love of cooking.” Ms. Thompson, who posted pictures from her high-school prom, does have an extensive collection of ketchup packets and knows several delivery men by name.

They singled out his tagline, “You only live ONCE–in this life,” as pure poetry.

At press-time, Chester was reportedly seen having an awkward conversation with Ms. Thompson. 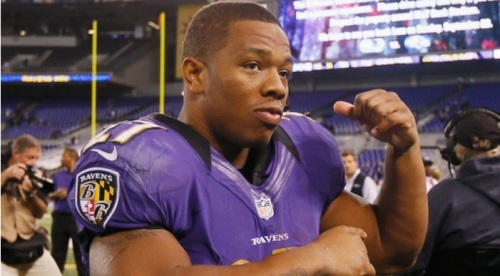 Praising his durability, yards after contact, and treatment of women, ISIS leader Abu Bakr Al-Baghdadi invited Ray Rice to the group’s official training camp, to be held at an undisclosed location.

“Unlike most Americans, we like where his head’s at,” Al-Baghdadi said.

No stranger to viral videos, ISIS shared the TMZ footage of Rice striking his wife across their social media platforms, inspiring a rallying cry from members to extend an olive branch to the disgraced football player.

A representative of the former Raven said Mr. Rice was “exploring his options” and also considering the CFL. According to sources, Rice is a top target for the 2015 ISIS recruiting class, along with a Yemeni engineering student at MIT.

“High motor, explosive potential, great intangibles, and an American passport,” said one camp insider. “If he puts it all together, he can be really dangerous.”

Al-Qaeda is also reportedly high on Rice and has invited him to visit their training facilities. “Bunch of old men on monkey bars,” Al-Baghdadi said. Thanks to kidnapping ransoms, ISIS is prepared to offer Rice a lucrative free agent contract and signing bonus.

“What Ray Rice did was wrong,” ISIS spokesman Abu Muhammad al-Adnan al-Shami said. “He should not have apologized.”

“When a woman disobeys or disrespects you, Sharia says first admonish her, then beat, and then stone,” al-Shami continued. “Repeat as necessary, or until she stops moving.”

Al-Baghdadi welcomed Rice to join the team and do what he does best. “They can’t see a black eye when she’s wearing a veil,” he smiled.